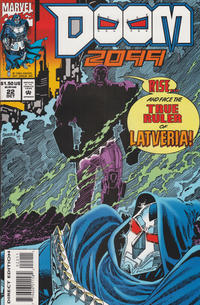 "The Narrow World,"  and "Seize the Day," written by John Francis Moore, with art in both by Pat Broderick and John Nyberg.

What happens when Doom decides to expand the boundaries of his rule? Which old enemy from earlier in the series re-appears? And what of this other fella who claims to ALSO be Doctor Doom?

Posted by Relatively Geeky at 3:59 AM