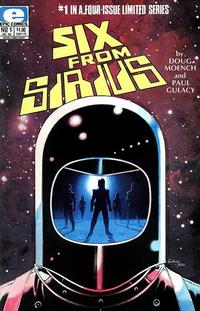 "Phase 1: Phaedra" and "Phase 2: Masterfax," both written by Doug Moench, with art from Paul Gulacy.

What happens when Professor Alan heads to outer space to keep two planets from going to war? How does the kidnapped Ambassador fit in? How about the robot assassin? And the quintet of dead spiritual Elders?

Source: In the Ballpark

Posted by Relatively Geeky at 3:22 AM