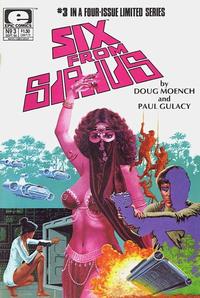 "Phase 3: Heavenstone" and "Phase 4: Mindprime," both written by Doug Moench, with art from Paul Gulacy.

What happens when Professor Alan tackles the last 2 issues of this Epic mini-series? Or is it the last half of a graphic novel? Does he make it out alive when the bar brawl begins?

Source: In the Ballpark

Posted by Relatively Geeky at 2:46 AM