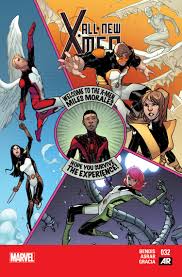 Untitled by Brian Michael Bendis, with art by Mahmoud Asrar.

What happens when the younger versions of the original X-Men find themselves on an alternate Earth? How does X-23 deal with landing in the middle of a football game -- or is it a match? How Jean Grey deal with hanging out Miles Morales? How does Iceman deal with landing UNDER the Earth? And how does Professor Alan deal with the first ever X-book covered her on the podcast?

Posted by Relatively Geeky at 3:07 AM